SDCC 2016 took place in July. Here is our recap FINALLY!!! Lots of pictures were edited or thrown out lol. We still have a few more to go. Sorry for the delay, just a lot of other things going on plus catching up from being gone for a week during the con.

Check out all of our SDCC Slideshows towards the end of this article to see our pictures. We have over 1000 pictures. There are different albums to see different companies such as Mattel, Super7, Designer Indie Toys, Mezco, and more!

It's a been a month, still trying to decompress from everything that went down in 4 1/2 days. So many things to do and see that it's impossible to do everything. A lot of events are spread out throughout the downtown area of San Diego.

The good news is that at least some of their exclusives were shared exclusives with stores such as Hot Topic, Barnes &amp; Noble, Gamestop etc... Picked up a couple that we had wanted! No lines!

Other than that, the lines for everything else was the same as previous years.

One of our favorite booths was the Nickelodeon booth this year because of their booth design as well as some of the props from various 90's Nick shows. When you purchased something you had to pay them through Chuckie's glasses. (Chuckie from the Rugrats!) They also had on display where you could take pictures is the Pick It Nose from Double Dare and The Stoop from Hey Arnold! There was also Olmec from Legends of the Hidden Temple with various Nicktoons characters around him. Olmec also talks and all you had to do was get in line and answer a Nickelodeon question. They also gave out prizes even if you didn't get the answer right. Very cool!

Conan O'Brien aka Conan Con had a bigger presence this year at SDCC. Not only did he have live tapings of his show in San Diego at the Spreckles Theater but also a booth with TBS inside the con as well as partnering with Funko/ CCI to give away Conan Pop figures. You were able to get a Conan Pop figure by attending a live taping if you were selected of course or at the TBS booth once you've done the Conan VR experience but the best chance would be at the Manchester Grand Hyatt where you would draw a ticket to see if you were lucky enough to get a Conan POP! Figure. There were 4 different Conan POP figures this year - Stormtrooper, Joker, Ghostbuster and Superman.

Funko had their annual Fun Days. Getting tickets were extremely tough and they sold out in seconds. We were lucky to get a couple of tickets and we'll have separate post on that later this week hopefully.

There were so many things to do inside the convention center as well as outside. The weather was a bit hotter than usual on certain days and one day was pretty windy. We didn't go to any panels since we're trying to cover as much as things as possible inside the exhibit floor as well as the outside events. Really wanted to see the Suicide Squad Belle Reve and Game of Thrones Hall of Faces. Lines for both were pretty long so had to pass. FX, Adult Swim, Fox and the Petco Interactive Zone were all back in their usual spots around the convention center. This year they also had the Comic Con HQ around the back where the Hilton Bayfront is. There was also a South Park 20 area as well as a Batman v Superman area where you get to see a giant statue of the False God as well as the Batmobile. Wonder Woman's Invisible Jet was somewhere there as well lol. There were many off-site things to do. Too many to name.

Every year that we've been to SDCC, the show does get bigger and better. It's the experience of just being there and looking at the displays. Just enjoying yourself and the people around you who geek out at the same things that you do. It's less and less about exclusives as you know a lot of exclusives aren't really exclusives since they can be purchased from the company directly via pre-order or sold later on after the show, during the show etc... The Indie Toy Companies or the Toy Grower's Cultyard has shrunk significantly this year. It's a shame but at the same time the cost for a booth is expensive and then you have to add in all the travel expenses etc... so we look forward to seeing them all at DCon.

SDCC is more Pop Culture every year with TV &amp; Movie Studios as well as Major Toy &amp; Gaming Companies. There are Major Comic Companies there too but they often get overlooked. Probably the one thing that is the most problematic is congestion in aisles where you're walking/shuffling through various areas of the convention center. There's really nothing you can do unless the convention center expands. Other than it was another great year and spending a week in sunny San Diego.

If you aren't already following us, we have posted a lot of pictures on our instagram.

Until next year San Diego!!!

EVERYTHING ELSE (LOTS OF PICS) 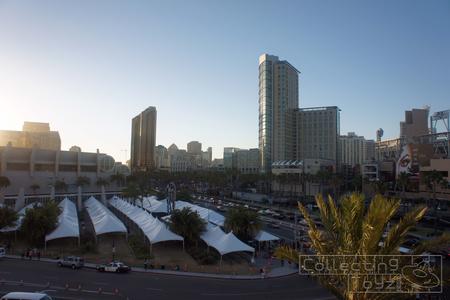