This slideshow above features pictures from the Rover.com Dog Cosplay Contest which was hosted by Jennifer Jolly. Steve Wozniak was in attendance for the first ever Dog Cosplay contest. There were 12 finalists that were selected before the show. You had to enter your dog via instagram.

The one thing that could've been better was if they had gave more info on how to enter the Dog cosplay weeks before SVCC and not just a few days. This would have allowed people to get costumes ready for their dogs.

SVCC has grown tremendously from last year and this show has the opportunity to grow every year. We love what Steve has done with this show! It's different from other shows that's for sure. We can't wait to see what Steve has planned for next year's SVCC!

If you did not attend SVCC this year, you missed a great show! We'll see you next year!

This set of pictures featured items that were up for auction from Screen Used. Items shown were from Back to the Future, The Karate Kid, The Power Rangers, Castaway, Superman, Star Wars and many more.

Above is pictures from Steve Wozniak's Opening Speech on Saturday, April 22nd at SVCC. He was introduced by Pepper the Robot and various R2-D2s and other Droids.

The pictures above show the Outdoor Festival as well as some cosplayers. Even Guardians of the Galaxy get hungry and need a Hot Dog. The Outdoor Festival at the time was still early in the day so not very crowded yet. There were a lot of Food Trucks, Beer and even vendors. You could also buy SVCC merchandise and tickets. This area was open to the public whether you had tickets for SVCC or not. 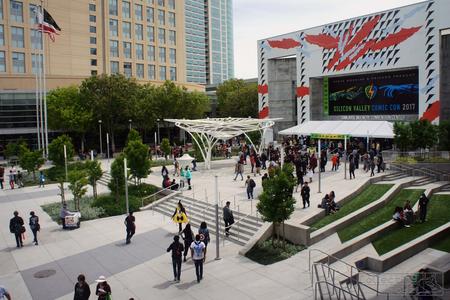 Photos by Tracy and Tara

Silicon Valley Comic Con is now the Largest Comic-Con Show in Northern California. This year Silicon Valley grew bigger and had a stellar lineup of Celebrities and Guests throughout the whole weekend. There were panels, cosplay contest, dog cosplay contest, technology, NASA, video games, an outdoor festival and so much more.

SVCC is from the brilliant mind of Steve Wozniak who was on hand every day of the show. SVCC expanded into the City National Civic where they held their huge audiences for popular panels. The also took over the Plaza de Cesar Chavez for their Outdoor Festival.

What stands out a lot about SVCC is just how much Steve Wozniak appreciates everyone coming to his show. On Saturday Morning before the Exhibit Hall opened he came out and gave a speech to open SVCC. Then on Sunday, he gave another speech to close out SVCC. He was present at the Dog Cosplay Contest and pretty much at every other event.

The pictures above shows the exhibit hall and various areas of the show including a few cosplayers.