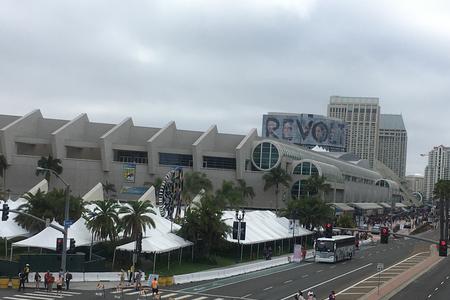 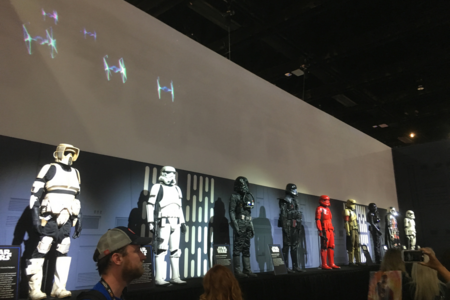 This year marked the 50th year that San Diego Comic Con has been around. SDCC was held at the San Diego Convention Center in San Diego, CA on July 17th (preview night) to July 21st. Before SDCC started, if you were lucky enough to get a badge to attend, you would be lucky enough to participate in the SDCC Portal for exclusives and signings. This year they gave out an allotment of credits for each day that you had a badge for. From there you would select what you wanted and could use the amount allotted per day for exclusives etc... You could use 1 credit or multiple depending on what you wanted. Entering or using the credit doesn't guarantee that you will win anything no matter how many credits you decide to use. It's still a random lottery draw. A few days after the portal closes, SDCC lets everyone know if they got anything they entered for.

We were lucky to get a couple of exclusive times to wait in line to buy exclusives. SDCC should also be named LineCon with the majority of time standing in line to buy exclusives, to get into the convention center, signings, panels, outside activations and whatnot. Even with all the lines and insanely overcrowding and clogging of people walking through various areas of the exhibit hall it was still somewhat enjoyable. We love looking at how some companies go all out on their booth display to seeing what new and upcoming collectibles will coming out. The hardest part was trying to get pictures of all the new and exciting things coming out. Still would love for SDCC to offer a few hours for press/media to walk around and take pictures of the various companies booth displays featuring new upcoming toys/collectibles.

This year we were able to attend quite a few press/media viewings for various activations which we kick off on Preview Night with the Amazon Prime Video  Experience. Then we headed off to the media/press preview for the Dragon Ball World Adventure and the Guinness World Record of the most people doing the Kamehameha. It was a pretty busy day for us as we had to make one last appointment before heading inside the convention center to stand in line to get into the exhibit hall.

This year we were so out of luck on getting Conan O'brien tickets. We didn't get any Funko ones either but luckily the majority of the ones we wanted were shared exclusives and were easily obtained. We did get Hasbro as well and the line to just get in for the time that we were selected for was continuously capped well after the time that we were there for. Perhaps they need to re-evaluate how they can get their lines moving quicker. This year just trying to get in line for Mattel was struggle. Even though we are always early to get in line for the exhibit hall, once the doors open and by the time we get to the Mattel booth, the line is already capped. Interesting to know how people get to the Mattel booth so fast when the doors just opened. Also crazy is by the time we arrive at the Mattel booth people are already walking around with bags full of exclusives. The doors to the exhibit hall were opened for 5 or 10 minutes max. The main reason we wanted to get in line for Mattel was to try and get the Mario Kart Hot Wheels since we missed that when they went up for pre-sale before SDCC and to pick up the Star Wars Mouse Droid Hot Wheels that was announced after the pre-sale closed.

The most inventive booth was the Nickelodeon booth this year! It was all Spongebob! They turned their booth into the Krusty Krab and Mrs Puff's Boating School. Comedy Central had a Crank Yankers area which features 4 of their Crank Yankers puppets along with phones magically on the walls that you could pick up and listen to them. The Star Wars area had a huge lineup of all the different Star Wars troopers.

Everyday we were busy non-stop. Navigating the convention exhibit halls to seeing as many activations and outside events as possible. Once of the most popular activations was Brooklyn 99. It was an escape room type activation. This is probably why the wait times were so long. Many fans waited in line in the wee hours of the morning to get in. Other popular activations was Superstore, The Good Place, Detective Pikachu, Shazam, The Orville, Petco Park Interactive Zone, FX Fearless Forum, Adult Swim on the Green and more... We had a great time checking out Super7's Revenge of the Boodega featuring exclusive Universal Monsters merchandise. The pop-up store was up for 2 days and then the Good Grief! Peanuts Pop-up store opened up Friday evening.

Since this was San Diego Comic Con's 50th Show, where was the cake lol?  It's a huge milestone and we're glad to be a part of it. Most of the time we like to walk the convention floor aimlessly since sometimes it's really too hard to try and cross from one aisle to the next. Even then it's a struggle to get to one booth to another. Sometimes we miss the days when there was more room to walk each aisle and row. The struggle is real. One suggestion is to offer comic-con badge holders the first couple days of the convention to attend the outside activations before people who do not have badges.

Our main SDCC 2019 picture album is located HERE. Our slideshow has a limit of 500 photos and we have over 1000 photos in this one album alone, so you can view the rest of our pictures at the link above. We have a lot more pictures of our offsite visits in the direct links below.

We have also separate pages for the activations and pop-up events that we attended. Here's the links below:

Revenge of the Boodega Pop-Up Shop

Thanks for reading and looking at our pictures! We'll see you next year!