Super7 is a personal favorite and of course made sure that I stopped by their booth. This year they brought along their mascot Mummy Boy at the booth. This was new and debut at their booth during Toy Fair! If you went to NYCC, he was also there! They had quite a few exclusives as well as a good amount of prototypes for upcoming releases.

Also this year, they had 2 separate events held throughout SDCC at their store in downtown San Diego. They had their Skeletor's Lair which had Skeletor Pinatas and out came 3 different Skeletor M.U.S.C.L.E. figures to those in attendance on Preview Night. They also had custom drinks.

The other event was on the weekend featuring UNKLE. UNKLE had a signing on Saturday and of course there were exclusives to purchase as well.

If you don't know, Super7 has a lot of awesome Japanese Vinyl Figures, T-Shirts, MOTU, ReAction and M.U.S.C.L.E. figures. You never know what they'll come up with next.

Check out some of the pics from SDCC below: 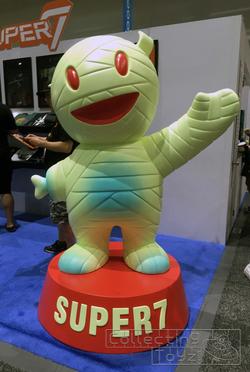