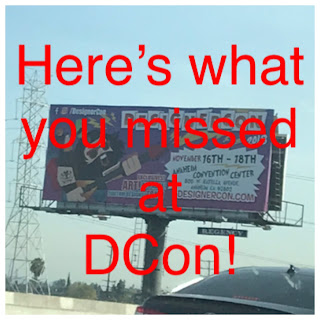 DesignerCon has come and gone. Still trying to figure out the best way to sum up this year's DCon besides HUGE lol. As you all know DesignerCon moved from Pasadena to Anaheim this year and the venue which is the Anaheim Convention Center made it possible to expand DesignerCon greatly. A lot of artists and companies that were not able to secure a booth in previous years were able to get one this year. DCon was HUGE this year. There was a lot of space between aisles which also meant a lot of space between the rows of exhibitors. It also meant you can look at both sides of the aisle to view the booth's items and so you have more walking to do lol. Planning which booth to hit up this year was very important as the one problem was there was no aisle numbers or booth numbers so sometimes looking for a certain booth you can get lost and end up somewhere else.

This year they had a few mini art shows within the show. They had a huge dinosaur and Jurassic Park vehicles as part of their Jurassic Park 25th Anniversary Art Show. There was also the Shard Dunny 2 Show which featured custom Shard Dunnys from various artists. There was a lot of things going on within the show. Different artists and companies released exclusive items at certain times each day etc... You really had to be selective as artists and companies are very spread out.

Saturday Morning by Funko was pretty busy starting on VIP night. They sold FunkO's Cereal, Cereal Bowls and T-Shirts. Wasn't sure how it was going to pan out but they had a corner spot and a big area to hold their line. Great booth display and Mike Becker was there throughout the show. You could get his autograph or picture taken. They also had cereal taste testing area.

There were a lot of artists and companies that came out from other countries such as Japan etc... Long lines were formed for companies like Refreshment Toy, RealxHead, Goccodo, Skulltoys, Punk Drunkers etc... each day. Other companies and artists that were back this year was Paul Kaiju, MVH, Splurrt, The Sour Lemon, Clutter, Rampage Toys, Touma, Kidrobot, Super7, Unbox Industries, 1000Toys, Lulubell Toys, Bwana Spoons, Gargamel, Cometdebris, Max Toy Co and many many more.

This year we took a lot of pictures. Normally we use both the iPhone and an actual camera lol but one of our photographers injured their hand prior to DCon which meant holding the camera to take pics was painful and uncomfortable. On the other hand, our handy dandy iPhones which are lightweight came to the rescue and we have about 1800 pictures or so to show you. Here's our LINK to our DCon 2018 Photo Album. There's definitely too many pictures to post here and since we have less time than usual, we didn't have time to watermark them which is also why we aren't posting them here. One thing we do ask is that if you want a picture to post or re-post elsewhere to contact us for permission or credit us when using them.

We left DCon pretty much poorer than when we arrived. There was so many awesome art and collectibles for sale that whatever we thought was enough $$ to spend this year was clearly not enough. Wanted so many more things but had to pick and choose. It sucks from a collectors standpoint for sure but when you have so many artists and companies bringing so much awesomeness all in one place you need to save as much money as you can. For those planning to attend to DCon next year. Plan ahead and save a lot of money. You're gonna need it.

To sum it all up, DCon was awesome this year! There were some things that they could improve on but overall we didn't encounter any major problems. Looking forward to next year! Enjoy the pictures!

In case you don't want to read our recap here's the direct link to our Designer Con 2018 Album. There's about 1800 pictures.