One of the things that we love about Designer Con is the badges that they have. This year for press Edward Scissorhands was featured on our badge. Vendors, VIPs and Attendees all had different characters on their badges.

They gave out the pins outside while you were waiting in line to get into the show.

Forgot that we also picked up a paper toy of Vince the Designer Con Mascot. We did not put him together yet. 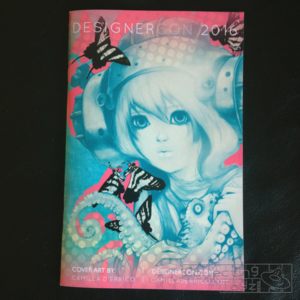 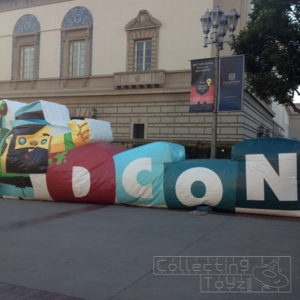 Here's the Designer Con Event Guide which has the map of the show floor featuring all the companies, artists etc... that have booths there. It also includes all the events and panels schedule for the weekend. 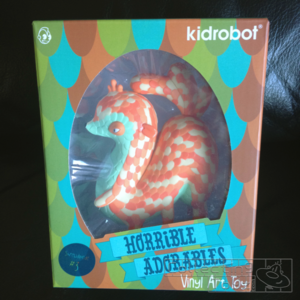 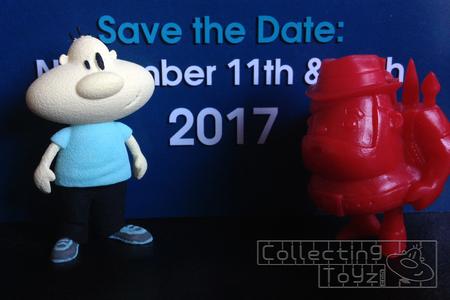 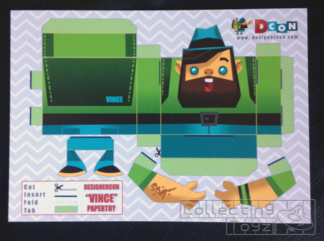 We also made sure to stop by the Designer Con booth to pick up the latest issue of Clutter. This issue features Mutant Vinyl Hardcore on the cover. By the way MVH wasn't at DCon this year.

Forgot to mention this earlier but there are lines for certain companies/releases so if you've never been to Designer Con or similar events brace yourself and get prepared for next year. Before DCon opened people stood in line hours before it open. Certain companies/artists such as Paul Kaiju who is very popular will give out wristbands or raffle tickets and you would come back at a set time and wait to hear if your number is called to purchase something.

As you entered the doors to get into the exhibit hall they were handing out Horrible Adorables Vinyl Figures on both days. 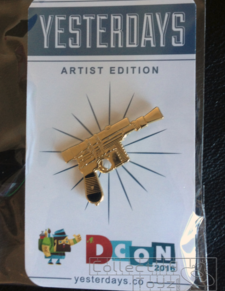 There was one line for RealxHead, Skull Toys, Punk Drunkers and Goccodo which started at the side wall close to where they were located and about 5 people at a time were grouped to go and purchase 1 item per pass etc...They controlled and managed the line very well. They had releases set for both days which was nice.

The Sour Lemon Booth had some heavy hitters at their booth. They had releases by Mirock Toy, Itokin Park, Paul Kaiju and held a Pushead event/release as well which drew a huge crowd and a long line. Munky King released Luke Chueh's The Prisoner vinyl figure which made it's debut at DCon and sold out very quickly. They also released Headspace #1 and Target (Mechanics of Life) Black which is a collaboration with Doktor A.

There was so much to see and do that even if you plan for things, you might get thrown off course. This show has grown really big from when it first started out and it's been fun watching the show grow every year. 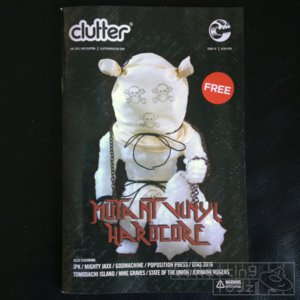 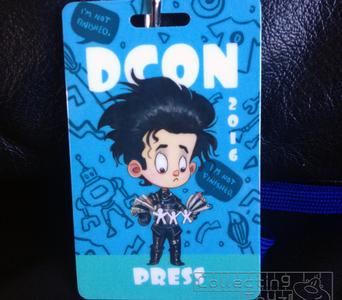 Unfortunately, we didn't get any pictures of booths before the show opened as we weren't allowed inside until the show started. So, some of the booths that we were able to get pictures of were pretty empty by the time we got around to their booth. We missed a lot of the one-offs and limited releases from companies such as Gargamel and Rampage Toys. This year the show was bigger than expected and there were so many exclusive releases being released that you really had to plan out which booths to hit up first.

There was a great turnout of attendees throughout the whole weekend. There were a lot of toy collectors that came from all over the world. Many were there for a lot of the Japanese Toy Companies that came out for DCon such as Refreshment Toy, Real x Head, Skull Toys, Punk Drunkers, Goccodo, Studio Uamou, Gargamel, Cometdebris and many more... Also the heavy hitters that drew a lot of attention was Paul Kaiju, Lulubell Toys, Rampage Toys, The Sour Lemon, Circus Posterus, Munky King, Super7, Unbox Industries, Toy Art Gallery, and so many more.

There were a lot of illustrators and artists there as well such as The Beast is Back, Genuine Haha, Jermaine Rogers, Joe Ledbetter, Jesse Hernandez, Bigfoot etc... If you collect pins there were companies there such as Yesterdays Co. and a lot of other companies/artists all had pins for sale at DCon.

Check out on of our slideshows below to see what you missed at this year's Designer Con.

We hope you enjoyed the pictures. Make sure you save the dates for next year's show which is  November 11th & 12th 2017 in Pasadena. We can only imagine how big the show will be next year. Happy collecting! Our lil pal JoJo with Vincent says so long! Happy Holidays and See you next year!

To view more pictures check out our post on our blog HERE.

How many of you went to Designer Con this year? We know that there was a lot of people who couldn't make it this year and we did our best to try and get pictures of as many booths and toys as we could. As you all know this year the show expanded into yet another hall. The inflatable DCon in the picture above was new as well. There was also street banners promoting DCon which we forgot to get a picture of.

If you were were one of the first 100 people in line each day, Designer Con was giving out free Horrible Adorables figures. Also DCon/Yesterdays were giving out pins to the first 100 in line as well.

On Saturday, they were giving out the Gold Rebel Blaster Pin which we were able to get. On Sunday they gave out a different pin but unfortunately, we arrived a little too late to get one.